When you have a very small kitten with an eye issue, a cone (or e-collar – to use the proper term) can be a bit of a challenge to deal with.  There are quite a few options out there for full grown cats, but when you’re dealing with a kitten like Night Rider, who weighed in at only just a pound when I first brought him in, the number of choices you have very quickly dwindles.  That’s why I wanted to make a quick post for anyone going through a similar situation.  Hopefully some of the tips I’ve stumbled on can save you a small amount of stress.

This one is actually easy, because I have one, and only one recommendation to make in the case of a kitten.  Better still, the recommendation I do have is fairly inexpensive.

In all the pictures of Night Rider that I’ve posted so far, the ever-present blue cone that you see is a Kong EZ Soft E-Collar (Extra-Small).  There are two reasons that I recommend it.  First and foremost, it’s soft, just as the name implies.  This allows a lot more comfort for your cat when it’s trying to do something as simple as lying its head down to nap.  Unlike hard cones, it has a bit of give to it that will also make it easier for your kitten to bend its head down for eating and drinking (more on that later).

And the second reason I go for the Kong cone over all others?  The weight.  Kong isn’t the only manufacturer to come out with an adjustable soft e-collar, but of all the others I’ve sampled, it is far and away the lightest one that I’ve found.  My first try with soft cones was a Contech ProCollar, and to be blunt about it, there’s just no way in hell that a 1 pound kitten can have a prayer of lifting their head up with that thing.  At 1.6 ounces, the Kong cone is about half the weight of the Contech one, and even my month old kitten was able to maneuver quite easily with it after only a couple days of adjustment.

Given the price of the cone, I’d actually recommend grabbing two of them if at all possible.  That will make it a lot easier for you to keep them clean without leaving your kitten cone-less for too long.  You can grab them at Amazon for about $6 to $10 in the U.S., and I can’t imagine them being much more expensive elsewhere.

Feeding with a Cone

There are few things as heart wrenching as watching a kitten in a cone struggling to figure out how to eat and drink on their own.  A lot of people will temporarily remove the e-collar for feeding time, just to make things easier on the kitten.  However, when this isn’t a safe option for your kitty, a little inventiveness is required.  Often times, you’ll hear that the secret is to raise the food up higher to make it easier for the cat to reach without having to bend down so far.  With a small enough kitten though, this solution doesn’t get us all the way to where we need to be.

Your biggest obstacle will probably be the same one that I ran into.  When Night Rider first donned his cone, his nose and mouth came nowhere near long enough to reach out past the rim of the collar.  That meant that if I put the food on a plate that was on top of a thick textbook, the food was at the right height, but the edge of the e-collar kept hitting the book long before he could get close enough to eat.  I could feed him by hand, and bring a saucer full of water up to him to lap from, but on his own he was helpless to drink or eat.  Since that wasn’t very sustainable and put the kitten at risk for not getting enough nutrients, I fumbled around with possible solutions until I found one that worked.

Here’s what I came up with. 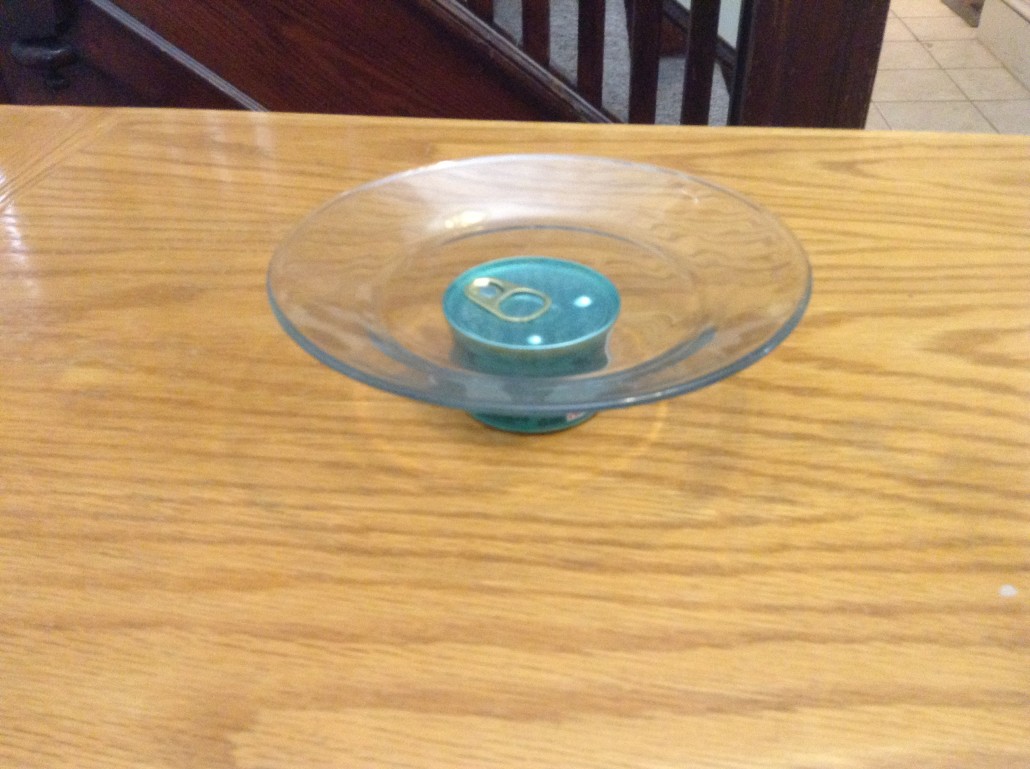 There’s not much to this.  It’s a small plate or saucer on top of an unopened can of cat food.  You can use superglue as well, if you don’t mind losing a plate, and you can fill the can of cat food with something heavier for added stability.  I’ve used a clear plate here for illustration purposes, but if your cat is experiencing vision problems, I would recommend going with a solid color (different from the one of your floor), to make it easier to see.  Your goal is to give enough room underneath the plate to allow the rim of the cone to slip underneath it, which will let your kitten get much closer than it could before.  While it won’t be very deep, you can use this solution for both food and water.  In the case of the latter, it may be tempting to just use a bowl, but if your kitten is too small, that’s going to present much of the same kind of problem that we’re trying to overcome, as the kitten may not be able to reach above and into the bowl to get their nose in it.

A little trade-off math has to be done here as well.  The smaller the size is of the can of cat food you put underneath the plate, the closer your can can get to the food.  However, with the smaller base comes a lot less sturdiness.  No matter what, you should expect your kitten to accidentally knock over the food or water on occasion.  Because of this, it’s a good idea to set up multiple food and water dishes if you have to leave your kitten unattended for longer periods.  Just be patient, and understand that all of this is only temporary.  As the kitten grows, you’ll be able to graduate to bigger bases under the plate, and eventually you’ll get to a point where you won’t even need to use this kind of setup at all.  Kittens grow quickly, so you’ll probably be able to make the transition much faster than you expected to.

Playing with a Cone

With so much of this post dedicated to the challenges of e-collars on kittens, I wanted to finish it out with something a little more on the positive side – kitten play time.

One of the most fun parts of having a kitten is that they’re so very playful.  A cone might seem like it would put a huge damper on all of that running around and pouncing on things, but it really doesn’t have to.  For the first few days after Night Rider got his cone, it seemed like he might be doomed to moping around and not being able to play with his sister very much, yet that down period didn’t last very long.  It wasn’t long before his cone transformed into something that was holding him back into his great and mighty shield.

This is hard to describe, and it’s hard to photograph, but Night Rider started to use his cone as a kind of weapon to charge Dark Streak with after only a few days.  The best way I know how to describe it is to tell you to picture not a kitten with a cone, but a Triceratops charging full speed, ready to ram at his rivals with the force of the huge new extension to his head.  It’s quite fun to watch when he really gets going, and I hope that you get to experience that same bit of joy once your kitten starts to get accustomed to its cone.

In addition to charging at siblings though, you can still give your kitten more traditional toys to play with as well.  You just have to keep one thing in mind: bigger is better.  Rather than getting a pack of tiny mouse toys, you should try to get one really big stuffed catnip toy.  The added bulk will help your kitty coordinate his pouncing abilities a little easier, so that he can jump on top of his sworn nemesis and still be able to attack it effectively with all four paws, even though he can’t see it beneath the cone.

Before you know it, your kitten will transform from that tiny hurt animal you took in, and it will become the playful, happy pet that it deserves to be.

This isn’t the last of the Night Rider series.  I still have a few more things to share with all of you, so keep your eyes here for more updates.