I know your gut instinct is probably going to be to panic a bit when you see the picture above, but I want to make a couple things very clear before that reaction takes its full effect.  First, the kitten you’re looking at is, despite appearances, very happy and playful.  He’s eating and drinking and playing just like a kitten should.  That may be hard to believe, given the state of his eye, but I swear that it’s true.  Second, and I’m saying this one in large part to try to deflect a few emails before you start writing them, he has already seen a vet.

As you’ve likely already figured out by now, the kitten you’re looking at is named Night Rider.  He earned his name thanks to the very late night trip he made to the emergency vet on the night before Labor Day.  Perhaps I’m being a little presumptuous here, but since you’ve seen his picture, I suspect there’s not a lot of mystery about why he had to make that 45 minute trip.

What you’re looking at is the result of a ruptured eyeball.  Since Night Rider was an outdoor stray, it’s difficult to say exactly what caused it, but I can tell you that the bulk of the damage happened over the course of just 12 hours.

About a week before that dreaded late night trip, I had discovered that a litter of four kittens and their mother were hanging out by my back door.  The kittens seemed healthy and playful, but a couple of them were having issues with their eyes matting shut.  This isn’t unusual for young kittens, especially for strays, but I knew that they were old enough that their eyes should be staying open, so I decided to help them out a bit.

Oddly enough, the kitten that was having the biggest issues wasn’t the one that would soon be called Night Rider.  It was one of his sisters that had both of her eyes solidly matted shut, with no hope of her being able to get them open on her own.  After 45 minutes of working on them with some damp toilet paper, I was able to get them to open up, and I gently squirted some eye wash into them to clear out some of the gunk and give her a better chance at keeping them open.  Since I noticed that Night Rider was also having some trouble with his eyes, I hit him with the eye wash as well.

A week went by of doing this twice a day, but I wasn’t making quite as much progress with them as I had hoped to.  Their eyes were both staying open a little easier, but they still were matting and having a fair bit of trouble with swelling around the eyes (conjunctivitis).  It was time to up the ante a little, so I decided to break out some of the Tobramycin that I had left from another batch of strays with similar issues.  I checked that the bottle hadn’t expired, and on the Friday before Labor day, I began doling out drops of it in the troublesome eyes three times a day.  By this point, there was a third kitten starting to develop eye issues, so I had my work cut out for me.  Luckily, for two of the three kittens, things started looking better almost immediately.  However, for Night Rider, things just didn’t appear to be getting much better in one of his two eyes.

My initial thought was to get him to my vet for a closer look, but they had closed for the holiday weekend, and the next best option was the emergency vet in Northridge (roughly 45 minutes away).  That kind of drive can put a lot of stress on a small kitten, which can many times cause more problems than it tends to solve, so I chose to wait out the weekend with the hopes of getting to my local clinic on Tuesday, when they opened back up.

Sunday morning started the same way that the previous two days did, with a 6am eye drop session.  Night Rider’s right eye was looking almost completely healed after the Tobramycin, yet his left eye was looking a bit worse than it did the night before.  There was some additional swelling of the top eyelid, with the eye starting to bulge behind that closed lid.  I hit it first with the eye wash to get the eye open, with the reward of a fair bit of puss coming out after it did.  After I had cleaned it out as best as I could, I waited a few minutes and moved on to the Tobramycin, hoping that this time its effects would finally start to give us some positive results.

At noon it was clear that things were moving very much in the wrong direction.  His eye itself began to swell to the point where the lid would no longer close over it fully.  The looming dread I had over putting him through the stress of that long car ride to the emergency vet still prevailed though, as I feared that it might push him over the edge.  Cleaning the eye out as best I could was about all I could do.  A couple more drops of Tobramycin went in with the strongest hope of finally making a difference.  If they didn’t reverse the swelling, I at least hoped that they might get us through the next day and a half until the vet opened up.  I debated taking him inside to get him out of the elements.  Unfortunately, the fact that he was still nursing without having started on solid food left me in a tight spot trying to decide if he would be better staying calm with his mother.  His mother, I decided, was the best way to go at the moment.

3pm revealed not much more change from what I had seen at noon, so I held on to the hope that we might make it past the holiday.

Once I finished recording the weekly podcast for Second Shifters, it was time again for my 6pm Tobramycin rounds.  Luck was not on my side as I walked out my back door.

What was there, instead of the bulging eyeball I was expecting to see, was one that had fully ruptured.  Infection had gotten the better of the eye, and it had essentially exploded into what you see now, in the picture above.  As I rushed to get him in the carrier, I called on some previous experience that I’ve had and decided to grab a friend for him to have as company for the long journey we would be making to the emergency clinic.  Kittens tend to be much calmer when paired with a sibling, so in went his sister for the ride.  Only a block into the trip, I could tell I was in for a long night.  Night Rider’s eye had begun to push out even further, and a bit of foamy red was coming out from underneath it.  For those of you wondering why I was so desperate to avoid the trip, this is why.  Stress doesn’t do well for kittens in situations like this.  Sadly, we had reached a point where there wasn’t much in the way of options.

Our star in this little trek weighed in at 1 pound and half an ounce.  That’s where things start to get a little complicated.  Being so very small, Night Rider was too young to safely perform surgery on.  Where normally the vet would remove the eye, that option wasn’t really on the table with this kitten.  Since he was otherwise healthy, the risk of surgery outweighed the benefits of getting rid of the infected eye.  I had a new goal – to get Night Rider up to a healthier weight and at the same time try to treat his eye to get the swelling down to a more manageable level before surgery.

That was almost four weeks ago, and I’m glad to say that it looks like we’re making a lot of progress.  Here’s Night Rider today (September 28th). 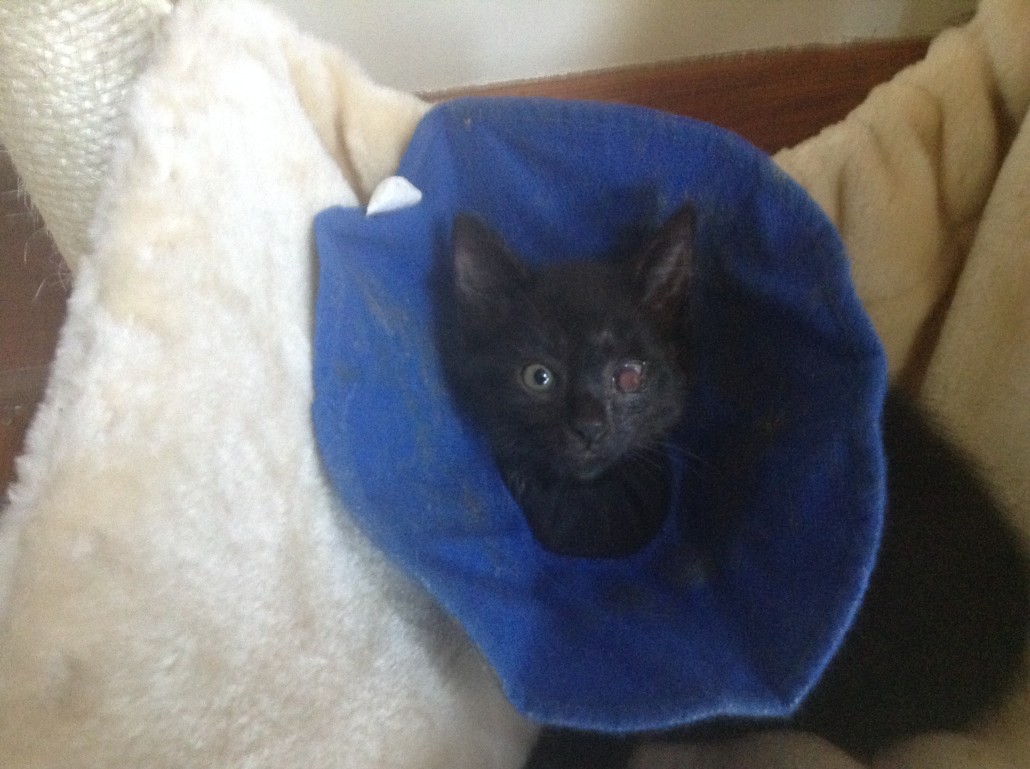 And here’s his sister, Dark Streak. 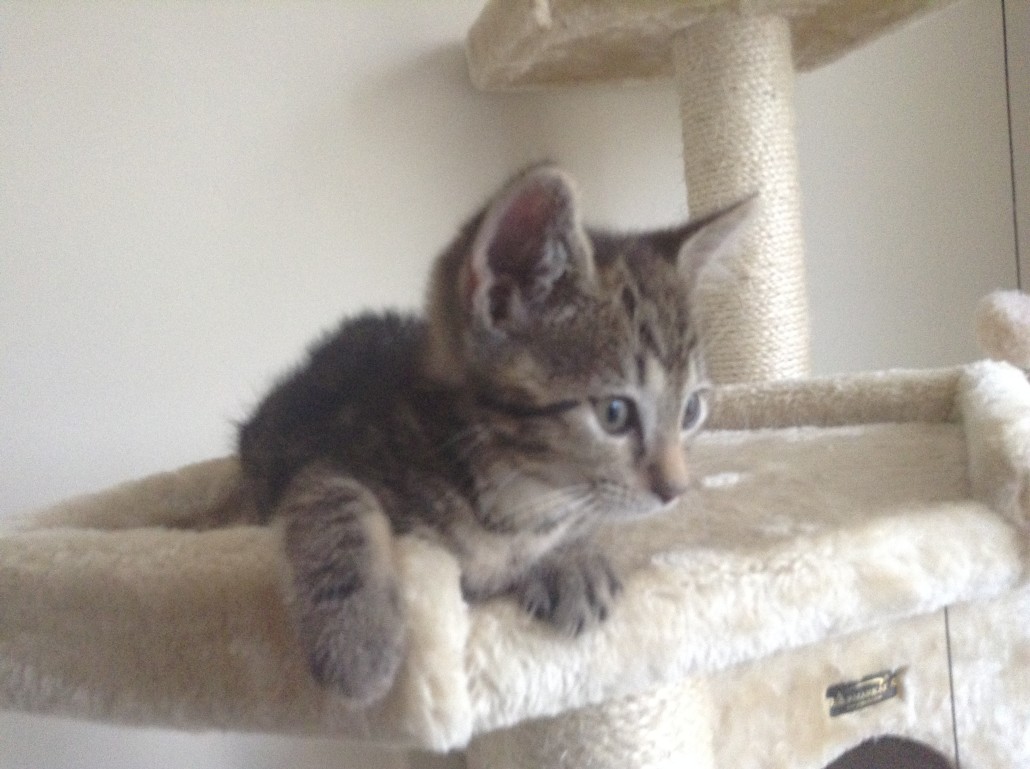 There’s still a ways to go on this journey, but I’ve already learned a lot that I didn’t know before.

Eye ruptures like this aren’t unheard of, but I had a good deal of trouble finding people who had been through similar situations to mine with a kitten so young.  There are probably a number of reasons for the lack of information out there, with some of them fairly grim, but I’m also certain that I’m not alone in having to deal with this.  That’s why this post isn’t the last that you’ll hear of my experiences.

In the coming weeks, I’ll be making more posts about Night Rider and Dark Streak to shed some light on what I’ve been up to for the past few weeks.  My hope is that they might prove useful to those that have to go through the same process, and maybe they’ll make things just a little easier to deal with along the route to surgery.

A Question on the Future of Writing

Cones and Kittens
Scroll to top